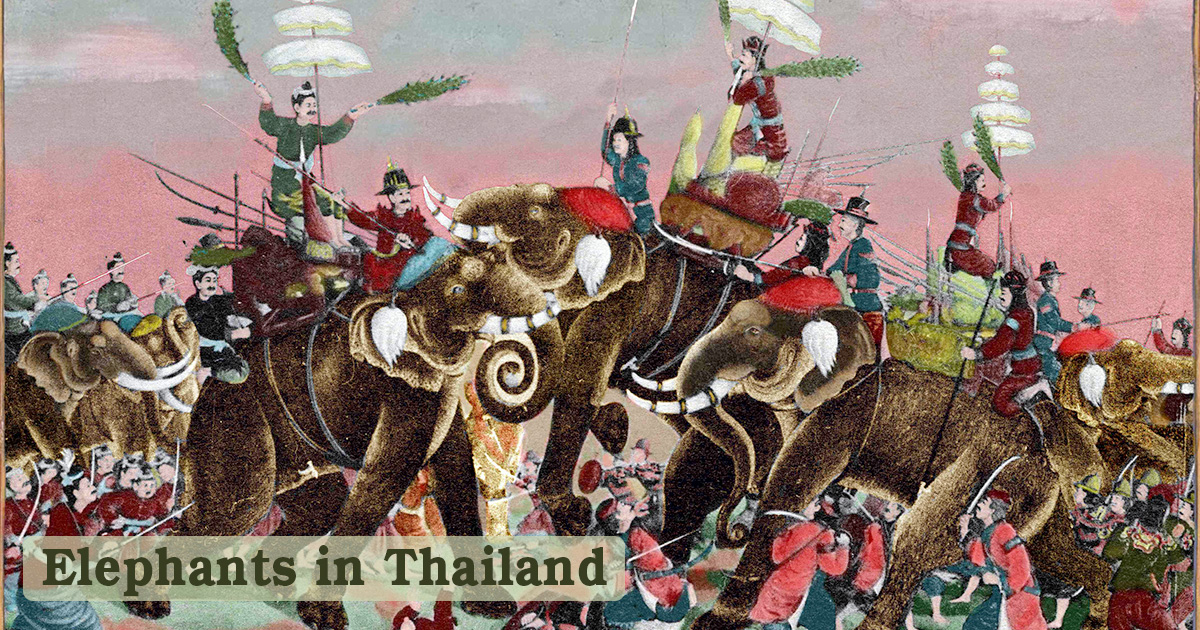 The elephant has been a contributor to Thai society and its icon for many centuries. The elephant has had a considerable impact on Thai culture. The Thai elephant (Thai: ช้างไทย, chang Thai) is the official national animal of Thailand. The elephant found in Thailand is the Indian elephant (Elephas maximus indicus), a subspecies of the Asian elephant. In the early-1900s there were an estimated 100,000 domesticated or captive elephants in Thailand. In mid-2007 there were an estimated 3,456 domesticated elephants left in Thailand and roughly a thousand wild elephants. It became an endangered species in 1986.

In Thai society elephants have played a substantial role in manual labour, war, royal iconography, and the tourism industry. For thousands of years, elephants were captured and trained to be a form of transport and heavy labour. When logging in Thailand was still legal, they hauled heavy logs through forests, which in turn gave many Thai people jobs. In recorded Thai history, during the reign of King Ramkhamhaeng the Great of Sukhothai, Thais used to hunt and trade elephants.

Known for their strength and intelligence, elephants were used as war elephants since the days of Alexander the Great. They were referred to as a warm-blooded armoured-tank. Each elephant has a distinctive personality. Mostly male elephants that are aggressive yet tameable were selected to be war elephants. They were trained with lightly pricked spear on their skin in order for them to move forward. The training was conducted in a loud environment of shouting and drum sounds to accustom them to the sounds of warfare.

Thai royals and elephants established a relationship over thousands of years. The first recorded Thai elephant was in the stone inscription of King Ramkhamhaeng the Great of Sukhothai. In this inscription he mentioned being nineteen and said his elephant, Bekhpon, advanced their attack on Khun Sam Chon to protect his father, while his father’s soldiers fled in fear. Chao Praya Prabhongsawadee was the elephant of King Naresuan of Thailand that came out triumphant in the elephant duel (Thai: ยุทธหัตถี) between the King of Burma and King Naresuan during the war with the Burmese. For a very long time, it was a law that when a white elephant was found and a tradition that when an elephant with good build was found, it was to be presented as property to the King of Thailand. The Thai sacred and royal symbol was the white elephant (chang pueak or chang samkan). They are not albinos but are genetically different. White elephants are not white, they are a dusky pinkish grey. Phra Savet Adulyadej Pahon was a white elephant that belonged to Thailand’s King Bhumibol Adulyadej.

Since the logging industry became illegal, elephants trainers (mahouts) have had to find other ways to feed their elephants, most of them turning to the entertainment industry and tourism. Most mahouts took their elephants to Bangkok, roaming the streets with baskets of fruits for the tourists to buy and feed the animal. Elephants now have to beg for food and perform tricks in exchange for money. This lowers the status of elephants. On 17 June 2010, laws were passed for elephant protection, making these acts illegal. Elephants in the entertainment industry are trained to follow over forty commands; they can kick soccer balls, participate in talent shows, and use their trunks to paint and lift objects and sometimes people.